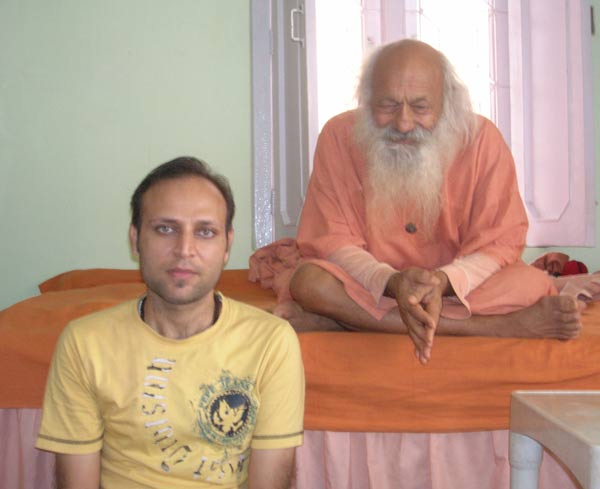 He stayed in a small two-storied building, which had been donated by one of the devotees. I remember the first time I met him: He was sitting on his bed, with a radiant smile on his face. He was around 65 years old, with a long white beard. He wore orange clothes, which meant that he had renounced everything. I bowed to him and sat at his feet on the ground.

There was a timeless innocence, a timeless bliss, in his presence. His laughter was totally unselfconscious and he always laughed like a small innocent child. He asked me a few questions about my spiritual journey and meditation practices. My first question to him was – “How do I find this reality? I have been meditating and seeking; still I am nowhere near it.”

He laughed his usual blissful laughter and said “Are you apart from that reality you are seeking?”

His laugher echoed in the recesses of my being and made me forget all about my question. His radiant bliss engulfed me and I sat quietly, with a big smile on my face. That was the beginning of a beautiful relationship with him.

He ate his food in an elongated dark bowl-like vessel, which was very unusual to look at. When I asked him what it was, he said that it was the dried hard skin of a Himalayan fruit. He had used it for food for many years. All his food was mixed and served in that single bowl. No plates or expensive cutlery for him! I was very fascinated with the bowl and asked him I could hold it. He graciously let me handle the bowl.

He was being taken care of by a young devotee named Dattaram, a simple and humble spiritual man, with a very soft voice. Dattaram always took special care of me. Most evenings he used to make delicious parantha (Indian tortillas) for me and served them with great love. He was selfless in his service to his Guru and to those who came to seek his Guru’s blessing.

It was customary to bring some fruits or food whenever we met an spiritually enlightened master. I usually brought some seasonal fruits and sometimes also offered money, which Sarvanandji took and kept in a cupboard which was beside his bed. One day, a middle-aged monk came to see him. Sarvanandji exchanged a few words with him and then got up and went to his cupboard. He pulled out some of the money which had been given to him and handed it to the monk. Then he asked Dattaram if there were any extra grocery or toiletries lying around. Dattaram got some tubes of toothpaste, soap, oil etc., which Sarvanandji gave to the monk. Once the monk left, Sarvanandji told me that the monk had financial difficulties and whenever he needed any help, he came to him.

I now knew why he kept the money in the cupboard. He was not hoarding it, but keeping it aside to help those in need. Such is the nature of spiritually awakened Beings. They keep giving endlessly. This incident made me respect him even more.

Another day, Sarvanandji asked me if I would like to accompany him on a walk to the Banks of the Ganga. I was very excited to walk with him, but I couldn’t keep pace with him! He jaunted along like a young boy, almost running, his beard and orange robes wildly flowing around.

I always felt a sense of immense joy and bliss in his presence. He was always intoxicated with this infinite ecstasy, which radiated out of him. Many times, we would sit on the stairs leading to the rooftop and talk about all kinds of spiritual topics, my mind soaking in the ancient wisdom of the sages. For him, everything was divine. Our troubles, our life, our suffering, our joy, everything was an emanation of this consciousness.

I always had a fascination of wearing a dhoti – a traditional Indian garment, which is worn on the lower part of the body. Nisargadatta Maharaj, Sarvanandji and many other Indian masters wore this. Dattaram also used to wear one, so I coaxed him into teaching me how to wear it. I bought a white dhoti from the market. In the evening after dinner, Dattaram helped me to put it on. It is a very long piece of cloth which is folded methodically, going over and around your legs and waist. I found the process of draping it very complicated. Learning to put it on was one thing, but walking in it was even more complicated! It was very flowy and if you were not careful enough, you could step on one of its folds and the entire dhoti would unravel and fall to the ground, like a bad wardrobe malfunction!

The next day Dattaram again tried unsuccessfully to teach me how to wear it. Then he tried yet again on the third day. On the fourth day, we both gave up and I was back in my jeans. My desire to wear a dhoti had been fulfilled and it never surfaced again.

Dattaram’s wanted to improve his English-speaking skills and every evening I started giving English classes to him and his friend, as a humble reciprocation of all the kindness & love that he had shown.

Sarvanandji’s favorite catchphrase was “Bahut accha, Bahut accha, sabhe accha” which translated meant “All is good, all is good, everything is good”. The underlying message was that the universe was working as it should: the consciousness was expressing itself in myriads of forms and all was all unfolding perfectly.

He fell sick towards the end of his life. My wife and I went to see him a few days before his death. On one of the visits, we found him lying in his bed; he was sick and his body in pain. Seeing him like this, I started crying. He looked at me with kindness and a radiant smile flashed on his face and said – “This body is just a temporary abode; the self is not be confused with the body”.

And then he uttered his catchphrase- “All is good, all is good, everything is good”

I was very taken aback by those words. I never imagined he would be saying these words while he was in such a state of suffering. In that one moment, I saw that he lived what he said, even in the face of immense suffering.

Shortly afterwards, I went to my hometown in Siliguri to meet my parents. A few days later Dattaram called me with the sad news that Sarvanandji had passed away. By this time all my teachers Bokhar Rimpoche, Ajja and Dineshanadji had passed away and Sarvanandji was the only living  spiritually realized master with whom I was deeply connected. I was heartbroken and totally withdrew within myself. Everything seemed devoid of meaning and joy.

Exactly eight days after his death, I had a beautiful dream. In the dream, I was going to visit him as usual. When I went inside the room, he was sitting on his bed just as he always used to do. He looked at me, with his radiant smile and said – “Don’t you remember what I always said? What was the point of being with me for so long if you won’t remember?” As he said this, his body started shining and dissolving into a golden light and I could hear the words “Bahut acha, Bahut acha, sabhe acha”. I woke up from that dream and started crying. Though I understood his message, his loss was too painful for me. I needed to grieve.

The next two weeks were spent in deep sadness, but one day, as I sat down for meditation, an unexpected radiant joy started unfolding within me. The ripples of joy started gently, and I was totally taken aback by it, as I wasn’t expecting this in the midst of my grief. Slowly the ripples became more powerful and then embraced me. Slowly that joy transformed into a deep sense of stillness and peace and suddenly I was in the state of pure consciousness, where I was everywhere. My consciousness expanded to engulf the entire universe. The sense of being Rajiv Agarwal, with a personality and a body-mind dissolved.  That consciousness without a name and form was me, was Sarvanandji, was Nisargadatta and all my beloved masters. They were never apart from me.

The time I spent with Sarvanandji and my other teachers was one of the most joyous times in my years of seeking.

Melbourne Time – Every Wednesday, 6:30pm to 7:30pm Use this Skype Link to join the group.

Due to Covid, all Spiritual talks are now held via Zoom. The talks are held on alternate Sundays, 3:30-5:00 pm Melbourne time.